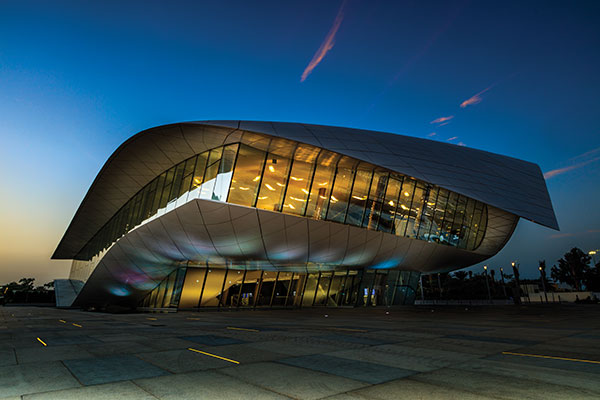 The museum won the Best New Museum in the Middle East and Africa award and placed first runner-up in the Best Museum Architecture of the Year category.

Etihad Museum tells the story of one of the most significant moments in the UAE’s timeline — the birth of the nation with the 1971 Union Agreement — through the eyes of the Founding Fathers.

The award was received by Dubai Culture, which manages Etihad Museum, and Dubai’s Roads and Transport Authority (RTA), which was responsible for the museum’s design and construction.

The facilitation took place during a ceremony on September 29 in London.

Abdul Rahman Mohammad Al Owais, UAE Minister of Health and Prevention and chairman of the board of directors of Dubai Culture, said: “I would like to gift this award to President His Highness Shaikh Khalifa Bin Zayed Al Nahyan; His Highness Shaikh Mohammad Bin Rashid Al Maktoum, Vice-President and Prime Minister of the UAE and Ruler of Dubai; His Highness Shaikh Mohammad Bin Zayed Al Nahyan, Crown Prince of Abu Dhabi and Deputy Supreme Commander of the UAE Armed Forces; and Their Highnesses Members of the Supreme Federal Council, as it captures their vision for the Etihad Museum to be a national, cultural and tourist landmark in the UAE that educates citizens, residents and visitors about the political history of the founding of the nation in 1971, and honours the Founding Fathers.”

Mattar Al Tayer, director-general and chairman of the board of executive directors of RTA, dedicated the award to Shaikh Mohammad Bin Rashid, who was the main supporter of the museum’s distinctive architectural design.

Al Tayer said: “Because of its historical importance, Etihad Museum has received the generous support and patronage of His Highness Shaikh Mohammad Bin Rashid, who also approved the current design of the museum following several design stages. The museum is located underground and connected to the entrance of the Union House and the Guesthouse, and is surrounded by a historical site that has been restored to its 1971 state. Seven columns represent the pens used by the Founding Fathers to sign the Union Agreement, and even the waterfront reflects the coastline that existed in that period. All of this gives visitors an evocative glimpse back in time.”